I got this invitation a few days ago for this event last night: 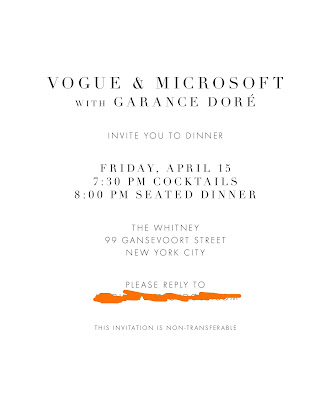 I wrote this back: 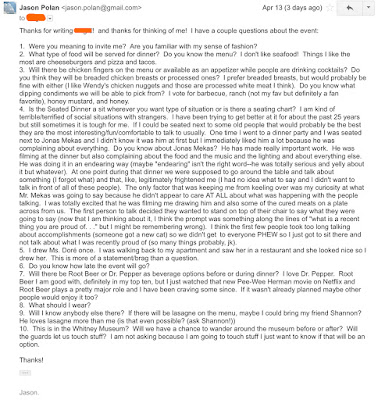 I didn't end up going because I heard they were having fish.
Posted by Jason Polan at 7:36 PM 5 comments: 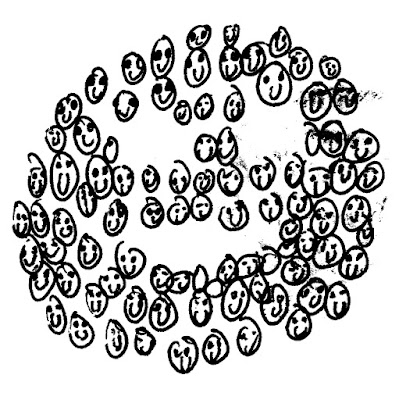 The flight was at 3:55pm but was delayed twelve minutes. I thought that was an ok sign (it's delayed, but at least it's a specific number that isn't very big). We boarded and I was sitting in the last row (I requested an aisle and the man at the counter said there weren't any aisle seats left. and I kind of paused and said "really?" (I was reaching) and he said, "there is one in the last row") next to two kids traveling without any adults. The flight attendant did a spiel with them and got them each a thing of Pringles. It was a brother and a sister. The sister was about twelve and the brother was about nine. After a little, the sister started going through the brother's sketchpad. He was an artist! The three of us became friends pretty quickly because the two of them were nice and nervous and I appreciate kids who are normal kids and nervous in situations like flying on an airplane without their parents (that they should be nervous in (and not like confident and outgoing)) because I was (am?) nervous in those situations and sometimes I interact with kids who are more confident as a seven year old than I am now and it makes me feel like a dufus. After a bit, the boy offered me a piece of gum. He drew a picture of a smiley face that was made up of other smiley faces (his sister filled in the eyes and gave the face pointy horns (which I could tell bothered the boy a bit)). I drew him a tiger. The sister was drawing some other funny stuff too (a dog with a pony tail) but I could tell the younger brother totally took his drawing seriously (he showed me his sketchpad--he was not messing around). He had a flag he designed that said DRAW SQUD on it. I almost fell over. After we had been sitting on the plane about forty minutes the pilot said there'd be at least an additional hour delay because of weather at LaGuardia. We drew more and after about 45 minutes we heard there'd be another delay so everyone deplaned. I went and got some Haribo Peaches. We got back on the plane about an hour later. I was making a to-do list as we were taking off and the little dude asked if he could look at my sketchpad. He flipped through and then asked me if I wanted any skittles. I asked if he'd draw me a picture and asked if he'd draw me the smiley face made of other smiley faces when he asked what I wanted him to draw. He did (this one) and I made a giraffe with six legs drawing for him. Things got kind of choppy turbulent and I tried to play it cool because I always think if people are looking around during turbulent airplane stuff it is more comforting if the people around them are calm. I looked at the little dude and he had his arms up and said, "it's like a rollercoaster". He then asked me if I was having fun and I stuck my tongue out (has there been anyone in history who actually enjoyed turbulence on an airplane before this kid?). As we were "preparing for our initial descent" he again offered me gum, "for your ears?" as we got closer to LaGuardia. His sister thought there was lightning outside but it was the flashing light from the end of the wing. We finally landed (I was relieved!) and waited for people to get off (we were that last row!). The plane was then going to Myrtle Beach. I thought, it would be nice to go to Myrtle Beach but I also liked being on the ground for now. I said bye to the little dudes, grabbed my coat and backpack, and walked up and out.
Posted by Jason Polan at 12:02 AM 9 comments: 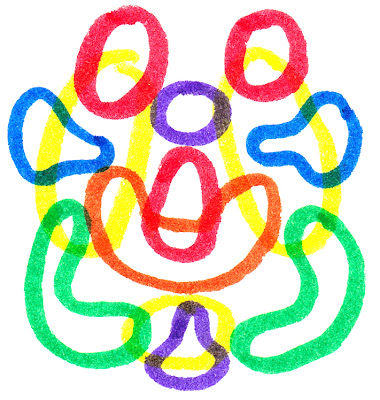 Some holiday gift ideas of things I have worked on recently. Also, you can email me if you have other ideas, like, if you want a silkscreen print of a pretzel I might be your man.

I hope everyone has a nice holiday season.
Posted by Jason Polan at 10:52 AM 2 comments: 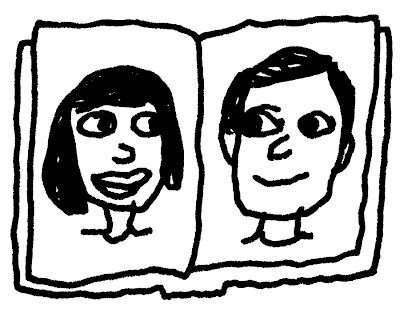 A show of new drawings (and some other things)

The exhibition includes a selection of books I have bought from different book shops in New York and Michigan and California (or found on my shelf (I am not sure where it came from)) and then drew a picture in.

I liked the idea of people holding an original drawing in a book they were reading. I also liked the idea that maybe they will eventually forget about the drawing in the book and be surprised when they find it again after they pull it off their shelf someday to give the book a quick skim. Each drawn in book in the show will also be stamped and signed inside the back cover to indicate that it was part of this exhibition.

Opening Saturday, August 31, 2013 from 5-8pm
Up through the month of September 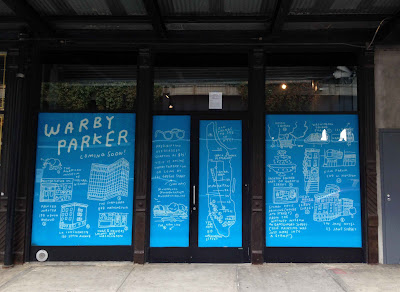 If you are over on the west side of Manhattan, this window is at 819 Washington Street! 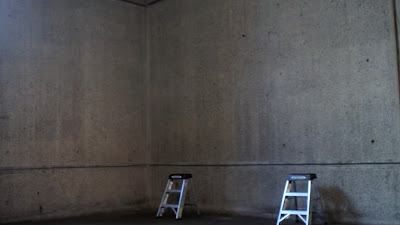 The Whitney Museum put this video together with footage shot during the Hopper Drawing Family Day Event.  I think it looks and sounds outstanding!!
Posted by Jason Polan at 9:23 PM 1 comment: 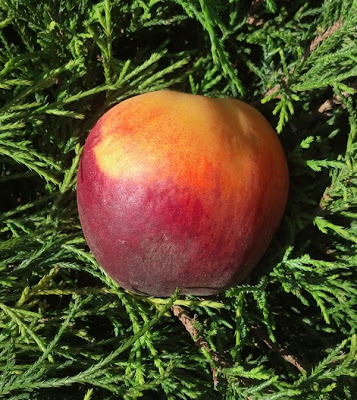 I will be on a panel at McNally Jackson Bookstore this Wednesday, June 26, 2013, at 8pm, for the release of the new Travel Issue of Lucky Peach Magazine! I am excited that we will hopefully talk about several things, including Taco Bell.
Posted by Jason Polan at 1:58 PM 5 comments: